Its that time of year again when we need to start looking for White Grubs in Omaha Nebraska. White grubs are one of the most recognized insects in the home lawn and landscape.  Almost every certified lawn technician or gardener has seen white grub larvae in the soil, while maintain turf, installing new plants or tilling gardens.

The term “white grub” actually encompasses the larval stage of several scarab beetles, the most common, and most damaging, being the June beetle or masked chafer, and the Japanese beetle.  Less well-known are the May/June beetle, and green June beetle.  All have a white grub larval stage that can cause damage to turfgrass.  The grubs are off white, with six legs located just behind their reddish-brown head, and are usually found curled into a “C” shape in the soil. 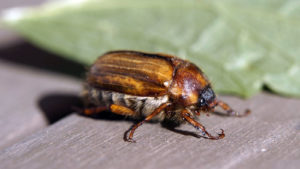 Adult June beetles are stout bodied, oval-shaped insects, about 1/2 inch in length, and dark yellow to light brown in color. They are most active at night and, unlike other scarab beetles, do not feed on plants as adults.  Japanese beetle adults are slightly smaller, only 3/8 inches in length, with a dark metallic green head and coppery-brown body.  They also have 5 tufts of white hairs on the sides of their abdomen.  Unlike June beetles, Japanese beetles do feed as adults, and can cause severe damage to a wide range of landscape plants.  Roses, oaks and cherries are a few of their preferred plants and can suffered significant defoliation. 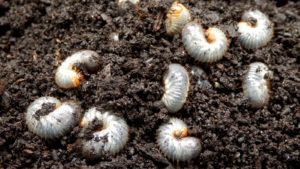 Masked chafers and Japanese beetles have a 1-year lifecycle.  Masked chafers are Nebraska native insects, so a few white grubs can often be found in almost every area of the landscape in spring, and do not warrant control.  The theshold level for turfgrass damage by masked chafer larvae is 8-10 white grubs per square foot of lawn.

Masked chafers overwinter in the larval white grub stage in the soil, so are commonly found in the spring garden.  However, these mature grubs do little damage and are difficult to kill ; so when control is necessary it is targeted at the next generation of insects. Digging in the soil you will find white grubs in the pupation stage, which means they are right on target to emerge as adults from late May through July.  Watch for the adult beetles around yard lights at night.

After mating, females tunnel a few inches into the soil and lay eggs, which hatch in about three weeks.  Soil moisture is critical to egg development.  Nebraska’s weather is different every year and current wet conditions could lead to heavy populations this year if they continue.  This year, the new generation of white grub larvae will begin hatching around mid to late June.

White grubs feed on turf and ornamental plant roots, and other organic matter in the soil.  Newly established lawns, and low maintenance lawns usually have few problems with white grubs.  Turf-type tall fescue lawns also have few problems.  Kentucky bluegrass lawns that are maintained at a high level with frequent fertilizer and water applications most prone to attack.  White grub infestations also tend to be localized to preferred locations in the landscape, such as a sunny, irrigated slope or turfgrass underneath a yard light, instead of being uniform.  Spot applications of grub control products can be made to areas with a history of attack, and not applied to the entire yard if the homeowner prefers.

Damage from root-feeding white grub larvae usually is at it’s worst in late July and early August if high insect numbers are present and not controlled.  As insects feed on the turfgrass’ roots, small patches of grass turn brown and die.  Damage is most severe in hot, sunny locations.  Initially damage may appear to be drought injury, or even a disease such as summer patch.  But close inspection of affected areas will show that patches of turf can be pulled back easily, like a carpet, and numerous white grub larvae will be found.

Later in the season, September and October, birds and other types of wildlife can cause further damage to your lawn as they rip up turf grass to find juicy, fat mature grubs.

Milky Spores is a common natural grub control product that is out there on the market.  We have heard mixed reviews of this product an caution you to do your own research before applying. While this is one of the only product used naturally for grub control, we have found that it can get expensive and has not worked for us. Milky Spore in the soil is not harmful to beneficial insects, birds, bees, pets or man; and Milky Spore, like other bacteria, is highly survivable in cold and drought conditions.

Grub control products should be applied near the end of June.  Imidacloprid (Merit) and halofenozide (Mach 2) provide excellent grub control if applied at the right time, which this year is mid to late June.  Both products are very effective against young white grubs, and provide three months of residual control.

However, if grub control is needed in August or September for an infestation that went unnoticed earlier in the summer, carbaryl (Sevin) or Dylox provide the best control due to their higher kill rate against mature white grubs.

Which ever white grub control products you use be sure to water-in after application for best control.

I just wanted to let you know that with the lack of rain the past month, all of our neighbors who use regular fertilizing programs have terrible looking lawns.  They have their sprinklers on constantly, and there are tons of dead and dry spots, especially in their backyards, where I’m sure their soil is just as compacted and filled with clay as ours is. While you’ve seen the back portion of our yard, and we both have agreed that it needs a lot of work, we now seem to have the greenest backyar… END_OF_DOCUMENT_TOKEN_TO_BE_REPLACED

Omaha Organics is the best Organic lawn company in Omaha.  They are extremely knowledgeable and offer top-notch customer service.  I am telling everyone I know in the area to use Omaha Organics as their Organic choice. I’m a do-it-yourselfer so I purchased the year treatment from Rob.  My two boys love to ‘help’ me mow and do things around the yard so they could actually come outside and help me apply this safe fertilizer!  My boys also didn’t have to wait a week or more before they could pla… END_OF_DOCUMENT_TOKEN_TO_BE_REPLACED

Just wanted to take a second to show you a couple pics of our front yard taken this morning. This is the best our yard has looked since we moved in in ’92.  The grass is thick in both the front and back and the color is amazing.  My husband commented on it first.  Also very few weeds these days.  Looking forward to your more organic weed killer you are testing.     Just wanted to say thanks for the great products and delivery service your company provides.   Thanks again.   Amy and Je… END_OF_DOCUMENT_TOKEN_TO_BE_REPLACED

First have to say that I have been nothing but very pleased with your lawn treatments and service. Followed your advise on cutting at maximum level and our lawn has never looked better. Also love that after a treatment I don’t have to worry about my kids, dog, or our garden. So thank you so much for that. I wish I could convince our neighbors to switch but  they seem to not care. Although I do especially when their lawn treatment is sprayed on and you can’t be outside without I inhailing toxic c… END_OF_DOCUMENT_TOKEN_TO_BE_REPLACED