Brown Patch is a common turf disease that occurs every year in eastern Nebraska and is caused by the fungus Rhizoctonia solani. In home lawns, Brown Patch is usually found on bluegrass, tall fescue, perennial rye and zoysia grass. Brown patch disease is typically seen from July to September but is currently being seen in turf as of June 5, 2014 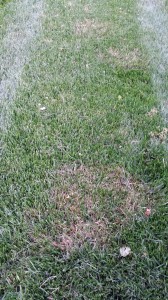 Brown Patch starts with scattered dead grass blades forming a circle or semi-circular pattern in the lawn. The circles of affected grass may be up to 2 feet in diameter, although they can be smaller as well. Close examination of the leaves shows long, irregular leaf spots that are light tan or whitish in color. The margins of leaf spots are dark brown or purplish-black. Grass in the center of the circles may not show any disease symptoms at all.

Brown Patch occurs most commonly on dense, heavily fertilized and watered lawns. Hot, humid weather with day temperatures of 85 degrees or above and night temperatures over 60 degrees are most conducive to the development of Brown Patch. Poorly drained soil, excessive thatch and evening irrigation all increase a lawn’s susceptibility to the disease by lengthening the amount of time the leaf blades are wet and providing good conditions for the growth of the fungal spores. Lawns that are heavily fertilized in the spring, put on lush, succulent growth that is very susceptible to disease. Using a dull mower blade will also increase the turf’s susceptibility to infection, because the dull blade shreds the ends of the grass blades and creates large wounded areas for fungal spores to enter. A sharp mower blade makes a quick, even cut with a smaller surface area for infection.

Cultural maintenance includes avoiding high nitrogen fertilizer applications during spring and summer; using low rates of nitrogen to maintain moderate growth and good recovery from disease; improving air circulation across the turf; avoiding evening and night irrigation; avoid over watering; and reseeding or overseeding the turf with resistant species or cultivars; mowing with a sharp blade and remove and dispose of grass clippings from infected areas of the lawn.

As a last resort Brown Patch can be controlled by the application of fungicides. These chemicals will protect new grass blades as they emerge from becoming infected. It will take several weeks before the turf can put on enough growth that the damaged areas are no longer visible. During this time, a homeowner can also reduce the severity of the disease with the following techniques listed above.

Information courtesy from the University of Nebraska-Lincoln, Turfgrass Science Program and UNL Extension. turf.unl.edu and http://byf.unl.edu/

Just wanted to take a second to show you a couple pics of our front yard taken this morning. This is the best our yard has looked since we moved in in ’92.  The grass is thick in both the front and back and the color is amazing.  My husband commented on it first.  Also very few weeds these days.  Looking forward to your more organic weed killer you are testing.     Just wanted to say thanks for the great products and delivery service your company provides.   Thanks again.   Amy and Je…

First have to say that I have been nothing but very pleased with your lawn treatments and service. Followed your advise on cutting at maximum level and our lawn has never looked better. Also love that after a treatment I don’t have to worry about my kids, dog, or our garden. So thank you so much for that. I wish I could convince our neighbors to switch but  they seem to not care. Although I do especially when their lawn treatment is sprayed on and you can’t be outside without I inhailing toxic c…

I just wanted to let you know that with the lack of rain the past month, all of our neighbors who use regular fertilizing programs have terrible looking lawns.  They have their sprinklers on constantly, and there are tons of dead and dry spots, especially in their backyards, where I’m sure their soil is just as compacted and filled with clay as ours is. While you’ve seen the back portion of our yard, and we both have agreed that it needs a lot of work, we now seem to have the greenest backyar…

Omaha Organics is the best Organic lawn company in Omaha.  They are extremely knowledgeable and offer top-notch customer service.  I am telling everyone I know in the area to use Omaha Organics as their Organic choice. I’m a do-it-yourselfer so I purchased the year treatment from Rob.  My two boys love to ‘help’ me mow and do things around the yard so they could actually come outside and help me apply this safe fertilizer!  My boys also didn’t have to wait a week or more before they could pla…