It’s time to aerate your yard!  Core fall aeration is the process of making finger sized holes in your lawn, and depositing the removed material on the surface to break down.   The primary goal of aeration is to reduce soil compaction, while increasing the root exposure, which allows fertilizer, water, and oxygen to more easily reach the roots where healthy grass originates.

Annual fall aeration should be part of every lawn care program in Nebraska. Clay soil is commonly found in eastern Nebraska and is prone to compaction which will lead to poor water infiltration, shallow roots, and poor turf quality. Adding a fall aeration to your turf program will help protect the investment you have made in your lawn.

Our fall aeration schedule starts in August and will run through the end of October depending on weather conditions.

Homeowners often overlook problems associated with soil compaction. Insects, diseases, improper watering, and a lack of fertilizer are often blamed for a lawns decline when the real culprit is compaction. The problem starts when the top four inches of the soil become compressed, impeding the movement of air, water and nutrients to the grass roots. This stresses the grass plants, making them less able to compete with weeds and slow to recuperate from injury. In time, a compacted lawn needs renovation.

Compacted soil contributes to the accumulation of thatch because restricted oxygen levels in highly compacted soils impair the activity of earthworms and other thatch-decomposing organisms. Thatch can lead to serious maintenance and pest problems. Thatch accumulates faster on compacted soils and heavy clay soils than on well-aerated soils. Therefore, some lawns may require frequent aeration to aid in thatch control.

If soil is compacted, the solution is straightforward: aeration. The practice of physically removing cores of soil and leaving holes or cavities in the lawn is defined as core aeration or aerification. Camshaft aerators drive tines deep into the soil and will out-perform drum or rotating tine machines in most tough soil conditions, which is why we use camshaft aerators. The hole spacing is closer than all comparable competing brands. The in-out tine motion produces less compaction on the inner surface of the hole than competitors rotating spoon designs. Our machine pulls roughly 5/8 inch plugs and averages 12-15 plugs per square foot.

The type of grass will determine whether to aerate in the fall or in the summer. Lawns composed of cool-season grasses such as Kentucky bluegrass and tall fescue are best aerated in the fall, when there is less heat stress and danger of invasion by weedy annuals. Allow at least four weeks of good growing weather to help the plants recover. Warm-season grasses such as zoysia grass, centipede grass, carpet grass, St. Augustine grass and Bermudagrass are best aerated in late spring and summer, when they are actively growing.

Aeration of home lawns corrects soil problems, but generally is not a routine practice. The best answer to the question, “How often should I aerate?” is, “As often as needed.” Most soils in Nebraska benefit from annual fall aerations. Turfgrass in high traffic areas may need aeration more often than the rest of the lawn. Turfgrasses with low traffic tolerance such as centipede grass and St. Augustine grass may need aeration more often than turfgrasses with good traffic tolerance, such as bermudagrass and zoysia grass. 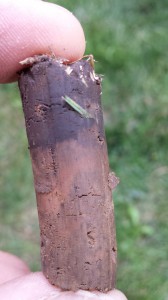 One of the best times to overseed, topdress and add soil amendments to your lawn is after a fall aeration. The holes left by the aerator are perfect microclimates for seed germination. Additional soil amendments such as calcium or compost can also be added at this time. The soil amendments will fall into the aeration holes and will be incorporated deeper into the soil profile.

After your lawn has been aerated, continue to water and mow your lawn as you normally would. The soil cores left on the turf will slowly break down within a couple of weeks after the completion of the aeration. Be sure to maintain proper soil moisture especially if any overseeding was done at the time of the fall aeration. It is very important to keep the seed bed moist for the best seed germination results. In the fall, depending on weather conditions this may mean watering 1-2 times per day in late August or once every 1-2 days in late September.

I just wanted to let you know that with the lack of rain the past month, all of our neighbors who use regular fertilizing programs have terrible looking lawns.  They have their sprinklers on constantly, and there are tons of dead and dry spots, especially in their backyards, where I’m sure their soil is just as compacted and filled with clay as ours is. While you’ve seen the back portion of our yard, and we both have agreed that it needs a lot of work, we now seem to have the greenest backyar… END_OF_DOCUMENT_TOKEN_TO_BE_REPLACED

Omaha Organics is the best Organic lawn company in Omaha.  They are extremely knowledgeable and offer top-notch customer service.  I am telling everyone I know in the area to use Omaha Organics as their Organic choice. I’m a do-it-yourselfer so I purchased the year treatment from Rob.  My two boys love to ‘help’ me mow and do things around the yard so they could actually come outside and help me apply this safe fertilizer!  My boys also didn’t have to wait a week or more before they could pla… END_OF_DOCUMENT_TOKEN_TO_BE_REPLACED

Just wanted to take a second to show you a couple pics of our front yard taken this morning. This is the best our yard has looked since we moved in in ’92.  The grass is thick in both the front and back and the color is amazing.  My husband commented on it first.  Also very few weeds these days.  Looking forward to your more organic weed killer you are testing.     Just wanted to say thanks for the great products and delivery service your company provides.   Thanks again.   Amy and Je… END_OF_DOCUMENT_TOKEN_TO_BE_REPLACED

First have to say that I have been nothing but very pleased with your lawn treatments and service. Followed your advise on cutting at maximum level and our lawn has never looked better. Also love that after a treatment I don’t have to worry about my kids, dog, or our garden. So thank you so much for that. I wish I could convince our neighbors to switch but  they seem to not care. Although I do especially when their lawn treatment is sprayed on and you can’t be outside without I inhailing toxic c… END_OF_DOCUMENT_TOKEN_TO_BE_REPLACED