The proper balance of water needed for healthy turf is critical; an improper balance of water in a turf ecosystem can result in both biotic and abiotic problems. There are two examples of water injury; flood or standing water and drought injury. We will focus on drought injury. The first step is to know how to properly identify water injury, so turf managers can minimize damage. In addition, water conservation remains a goal for many turf managers.

Drought is defined as prolonged water stress that limits or prevents turf growth. The severity of drought depends on the duration of low water availability. Turfgrass species differ greatly in their ability to withstand drought conditions; this is referred to as drought resistance. Drought injury is related to and often hard to distinguish from high temperature injury. 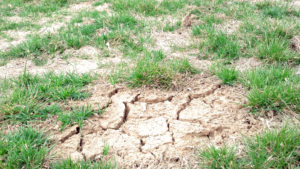 Symptoms of drought stress begin with the turf taking on a bluish tinge, followed by leaf rolling and, under severe drought, it will eventually turn brown. Drought stressed turf is often found near sidewalks, driveway, or buildings, and at the tops of slopes where increased air movement occurs. Drought stress also can be observed in localized dry spots (hard-to-wet areas) which appear as irregular patterns of dead and dying turf. As a result, causes of localized dry spots include sandy soils, compaction, buried building materials, algal infestations, and fairy rings.

Drought stress can be confused with injury cause by subsurface feeding insects such as billbugs, sod webworms, and white grubs. To differentiate drought from insect injury, examine the turf and determine if insect root feeding has occurred. There are various curative measures for drought stressed turf and localized dry spots. In particular, the use of wetting agents, aerification to improve water penetration and lateral water flow, removal of buried materials, selection of more drought resistant grasses, and deep watering.

A drought related abiotic problem is leaf and crown bruising. During drought conditions, many turfs go into a state of dormancy and their tissues become brittle and are susceptible to bruising. Bruising is when the entire shoot appears brown if the crown was damaged or brown streaks on the blades. This can often appear after dormancy is broken and growth resumes as brown leaves and shoots which fail to grow. The pattern of injury often is associated with footprints or wheel tracks.

Omaha Organics is the best Organic lawn company in Omaha.  They are extremely knowledgeable and offer top-notch customer service.  I am telling everyone I know in the area to use Omaha Organics as their Organic choice. I’m a do-it-yourselfer so I purchased the year treatment from Rob.  My two boys love to ‘help’ me mow and do things around the yard so they could actually come outside and help me apply this safe fertilizer!  My boys also didn’t have to wait a week or more before they could pla… END_OF_DOCUMENT_TOKEN_TO_BE_REPLACED

I just wanted to let you know that with the lack of rain the past month, all of our neighbors who use regular fertilizing programs have terrible looking lawns.  They have their sprinklers on constantly, and there are tons of dead and dry spots, especially in their backyards, where I’m sure their soil is just as compacted and filled with clay as ours is. While you’ve seen the back portion of our yard, and we both have agreed that it needs a lot of work, we now seem to have the greenest backyar… END_OF_DOCUMENT_TOKEN_TO_BE_REPLACED

Just wanted to take a second to show you a couple pics of our front yard taken this morning. This is the best our yard has looked since we moved in in ’92.  The grass is thick in both the front and back and the color is amazing.  My husband commented on it first.  Also very few weeds these days.  Looking forward to your more organic weed killer you are testing.     Just wanted to say thanks for the great products and delivery service your company provides.   Thanks again.   Amy and Je… END_OF_DOCUMENT_TOKEN_TO_BE_REPLACED

First have to say that I have been nothing but very pleased with your lawn treatments and service. Followed your advise on cutting at maximum level and our lawn has never looked better. Also love that after a treatment I don’t have to worry about my kids, dog, or our garden. So thank you so much for that. I wish I could convince our neighbors to switch but  they seem to not care. Although I do especially when their lawn treatment is sprayed on and you can’t be outside without I inhailing toxic c… END_OF_DOCUMENT_TOKEN_TO_BE_REPLACED