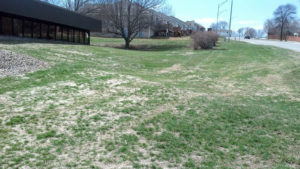 High temperature damage can be caused by direct solar radiation, reflected solar radiation from windows or other similar reflective surfaces (increased intensity), objects (containers of hot liquids, metal pails, car floor mats, storm window, etc.) placed on turf in full sunlight and lightning strikes. These heat sources are most detrimental when grasses are not able to cool themselves by evapotranspiration. When turf is covered by an non-permeable material, humidity levels increase and evaporative cooling does not occur. The resulting injury is referred to as scald. Initially turf will appear water soaked, but eventually it will turn brown. This is the same condition resulting from flooding and high temperatures. Cool season grasses are much more susceptible to high temperature injury than warm season grasses. 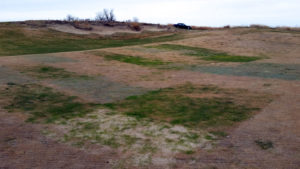 Under specific conditions, extremely low temperatures can damage turf. Generally, low temperature induced injury results from tissues being mechanically disrupted by internal ice crystals and hydration of the plant crown. This hydration results from the repeated freezing and thawing of the turf. Damage is typically associated with adequate water availability to plant tissue.

Another form of low temperature injury is winter desiccation. Winter desiccation is the result of drying winds in elevated areas of the landscape. As a protective measure, topdressing and winter blankets can be used on golf greens to avoid low temperature injury. In addition, light watering when air temperatures are above freezing can reduce injury. Selecting grasses adapted to those conditions also would be beneficial.

Injury to frosted turf is often associated with traffic from footprints or tire marks, similar to those caused by walking or driving on drought stressed turf. Frozen turfgrass plant tissues become brittle and plant cells are easily damaged by applied pressure.

When ice covers turf for long periods, excess moisture combines with freezing conditions to damage turf. This is often associated with soil compaction. Injury resulting from suffocation of turf due to large sheets of ice often will have discoloration patterns which appear as green irregular strips of turf in the damaged area. They result from ice cracking and oxygen being available at the locations. Ice injury often occurs in pockets or depressions where water can accumulate prior to freezing.

I just wanted to let you know that with the lack of rain the past month, all of our neighbors who use regular fertilizing programs have terrible looking lawns.  They have their sprinklers on constantly, and there are tons of dead and dry spots, especially in their backyards, where I’m sure their soil is just as compacted and filled with clay as ours is. While you’ve seen the back portion of our yard, and we both have agreed that it needs a lot of work, we now seem to have the greenest backyar…

Omaha Organics is the best Organic lawn company in Omaha.  They are extremely knowledgeable and offer top-notch customer service.  I am telling everyone I know in the area to use Omaha Organics as their Organic choice. I’m a do-it-yourselfer so I purchased the year treatment from Rob.  My two boys love to ‘help’ me mow and do things around the yard so they could actually come outside and help me apply this safe fertilizer!  My boys also didn’t have to wait a week or more before they could pla…

First have to say that I have been nothing but very pleased with your lawn treatments and service. Followed your advise on cutting at maximum level and our lawn has never looked better. Also love that after a treatment I don’t have to worry about my kids, dog, or our garden. So thank you so much for that. I wish I could convince our neighbors to switch but  they seem to not care. Although I do especially when their lawn treatment is sprayed on and you can’t be outside without I inhailing toxic c…

Just wanted to take a second to show you a couple pics of our front yard taken this morning. This is the best our yard has looked since we moved in in ’92.  The grass is thick in both the front and back and the color is amazing.  My husband commented on it first.  Also very few weeds these days.  Looking forward to your more organic weed killer you are testing.     Just wanted to say thanks for the great products and delivery service your company provides.   Thanks again.   Amy and Je…